Notice: Trying to access array offset on value of type bool in /home/customer/www/sierralobo.com/public_html/wp-content/themes/betheme/functions/theme-functions.php on line 1030

Michael Bischmann is an aerospace engineer working in the Aero Validation Branch of the Air Force Research Laboratory at Wright-Patterson Air Force Base. Michael joined Sierra Lobo in 2016 after graduating from Purdue University and has since been working on flow diagnostics in the various wind tunnel on base. Michael’s work in the tunnels primarily focuses on the use of Schlieren imaging and particle image velocimetry to help the tunnel operators and customers visualize and analyze the flow around a model while in the tunnel.
Recently, Michael ran a multi-phase test in the Discovery Wind Tunnel to assist in the development of a new heat actuated flow control device. The Discovery tunnel is a small 1×1 foot tunnel that is used for testing early designs of new models and technologies before being scaled up for testing in the larger tunnels on base. The test was a joint effort between several branches to develop a flow control device that can be actuated by applying heat to the material. The material was then applied to a small scale model and tested in the wind tunnel to determine the effectiveness of the material under real world conditions.
In order to measure the forces on the model, as well as the physical response of the new material, several flow diagnostic and model analysis techniques were used simultaneously to provide a complete picture of the model throughout testing. A special laser enclosure was constructed above the tunnel for this test to allow for precise and easy positioning of a laser sheet over specific areas of interest on the model. The laser is used for particle image velocimetry (PIV) and illuminates smoke particles in the wind tunnel to track how the air flows around the model and can show characteristics of the model and the airflow that cannot be observed through other methods. In addition, two cameras were mounted to the enclosure and used for digital image correlation (DIC) in order to measure the actuation of the model during testing. This actuation resulted in a surface deflection of only 0.75 mm but, through the use of DIC, the small change in shape can be accurately measured. A 3d model can be reconstructed showing the change in shape as heat is applied to the model and the material is actuated.
By combining the PIV and DIC data with the lift and drag measurements obtained from the force balance on the model, Michael was able to determine the how the experimental material behaved in real world conditions. as well the effect that it had on forces on the model and the air flow around it. This data was all sent back to the material design team in order to determine the strengths and flaws of the design and improve it for future iterations.
Article Cleared for Release by WPAFB AFRL Public Affairs Office. Photo Courtesy of Ron Sherrill. 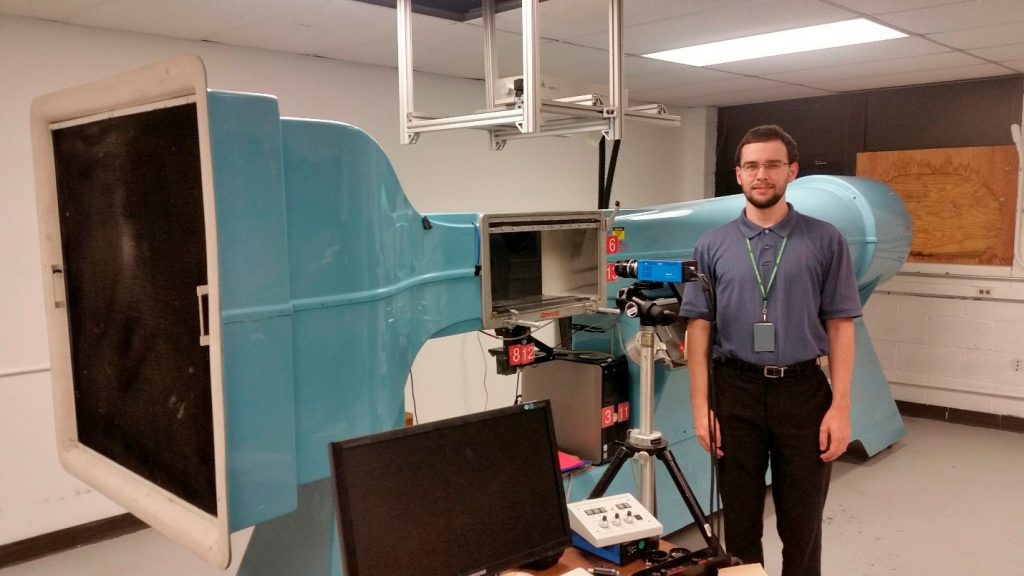