Christopher has been with Sierra Lobo since September 2015, after receiving his PhD in Aerospace Engineering and Engineering Mechanics from the University of Texas at Austin. There, his work in computational fluid dynamics (CFD) and the study of real-world engineering problems in the form of gas-turbine combustors prepared him for his current position at the Rocket Lab’s Combustion Devices Branch.

Upon his arrival, Christopher took part in the Combustion Stability Tool Development (CSTD) program, an ongoing effort to establish a practical means of quickly examining different injector geometries using high-fidelity simulations. In addition, he helped with the development of a next-generation CFD software known as the SPACE platform, created to simulate the strenuous and extreme environments associated with the combustion chambers of rocket engines.

Currently, he leads the modelling and simulation portion of the RDRE efforts at AFRL. Fundamentally, the RDRE is an annular combustion chamber which uses a cycling detonation to quickly burn the fuel mixture and create thrust. In contrast to the deflagrations typically seen in modern combustors, detonations cause much higher internal pressures which can yield hardware failure within seconds. Using CFD, Christopher is studying several different aspects of the RDRE, from the essential physics of detonations, to thermodynamic cycle analysis, to injector design, to full-scale modelling of the entire engine. This task involves development and implementation of new models, creation of computational geometries, and simulation of the cases themselves. The cases can range from simple 1D detonations, useful in validating new chemistry models, up to full 3D engines, which model the individual fuel and injector ports in addition to the combustion chamber and beyond. Overall, the goal is to work alongside the experimentalists at AFRL to establish an appropriate RDRE design methodology, optimize it to maximize performance, and eventually see a working engine used as a source of propulsion on future vehicles. 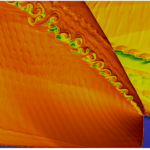 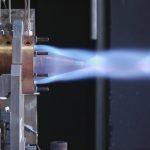 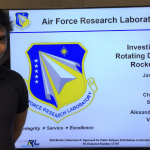