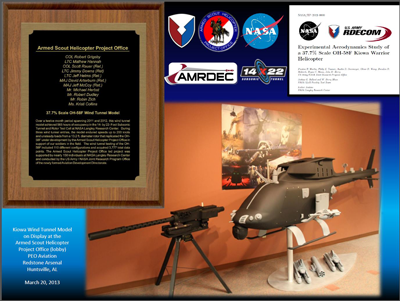 The Army’s Kiowa Wind Tunnel Model was delivered to its permanent home, as a display at the Armed Scout Helicopter Project Office Headquarters Building, in Huntsville, Alabama. It went through an extensive test program at NASA Langley Research Center’s 14 ft. x 22 ft. Subsonic Wind Tunnel, operated by a blended workforce comprised of primarily ROME Personnel. The Final Report is in its third draft (over 1,800 pages) and will eventually be published as a NASA Technical Paper. In recognizing our team’s support, the Army Program Manager said:

. . . I would like to thank each of you for your contributions, your patience, and your dedicated professionalism focused on the single goal of helping those who will be going into    harm’s way. We have not made their mission any less difficult, but with your help we have reduced the unknowns, improved mission planning tools, and provided many options to the Program Office for this and other aircraft like it in the future. So thank you for all the sacrifices you made in your lives to keep this project going: the extra hours, the patience, and the great Langley spirit that carries on generation after generation. It is a true honor and privilege to work with each of you. I hope we have another chance to do some more great stuff.

Charles Bolden, also recognized the efforts put forth by the team in his memo to the Associate Administrator for Aeronautics Research Mission Directorate, Jaiwon Shin, and the Langley Research Center Director, Lesa Roe:

Lesa and Jaiwon, please pass along my sincere appreciation to the Kiowa team at Langley for the tremendous test and development achievement exemplified by this display now at the Armed Scout Helicopter Project Office.

This represents a demonstrable savings of money that would have been spent on actual flight tests without the thousands of data points resulting from this project. It also represents a significant reduction in risk to test pilots and test flight engineers who would have had to fly some of the high risk ordnance carriage and delivery profiles had we not been able to model them as part of this project.